Galway City is on the west coast of Ireland and sits on the River Corrib in County Galway.  It is the cultural capital of Ireland, the Venice of the West and much much more.  It is one of Ireland's nicest cities and is a young and energetic place, yet ancient and historic.  The origin of Galway is uncertain however the ancient Irish called foreigners 'na Gall', hence the suggestion that Galway was 'the place of foreigners'.
Although its population is only about 75,000 - it is the fastest growing city in Europe.  Galway city is known as the 'city of the tribes' with its seaside suburb of Salthill.  It is an important tourist centre and a portal to the scenic areas of the county. 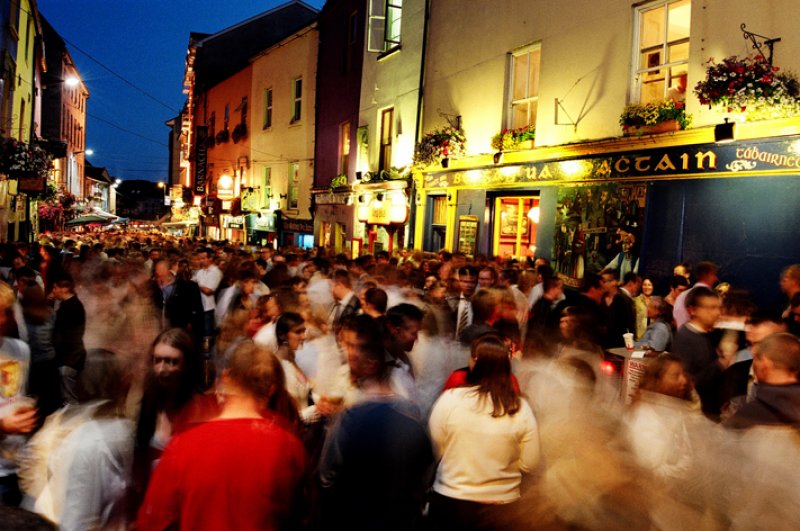 The Claddagh river is located very close to Galway City, across the Wolfe Tone Bridge and upon the extensions of Galway Bay.  It is just across the river from the Spanish Arch.

Eyre Square  is also known locally as The Square and is located in the centre of Galway city.  It has been recently remodeled and is very popular amongst the locals as well as visitors.  The park consists of green areas where you can sit and enjoy an ice-cream on a sunny day - eat your lunch with a friend or on your own whilst reading a book - to meeting someone by chance that you haven't seen in a while!  There is also a charming water fountain which was resurrected recently, and is eye-catching especially at night time when it is all lit up. 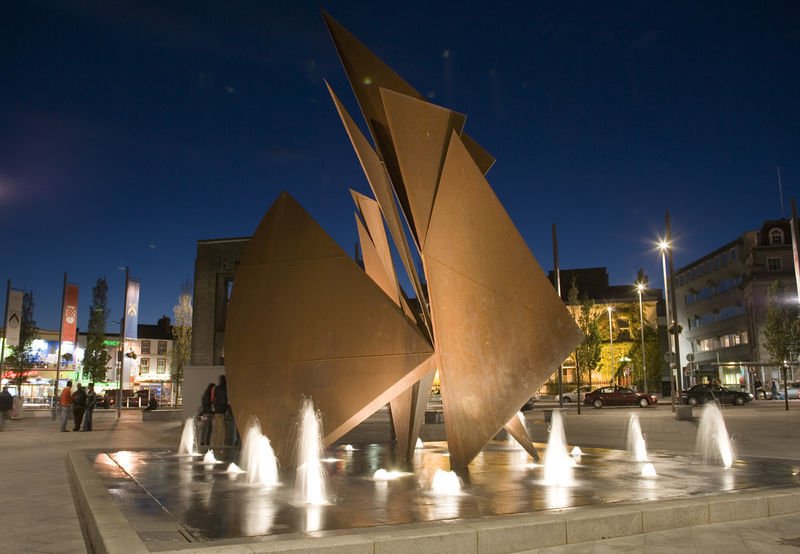 Things to do in Galway City

There are many walks in and around Galway City.  The famous pedestrianised shop street is where one will see the most impressive talent, from people playing musical instruments to dancing, singing and acting to name a few.  One will also notice many historical monuments and landmarks within the city:

Go to Salthill and walk the promenade or 'the prom' as it's called locally - it's a picturesque location by the sea where you can walk with your loved ones or take your dog for a walk or go for a jog or a swim!

Festivals and Events in Galway City

Galway Music Festival is held annually in May.  It promotes the performance of medieval, renaissance and baroque music.  The music festival features concerts by top international performers, workshops, schools events and music and theatre in the Galway City Museum and in the street.

The Galway Film Fleadh is usually held in July and is part of the impressive Galway Arts Festival.  There is a range of Irish and International movies screened here.

The Arts Festival lasts over 2 weeks in July and includes live performances on the streets and around Galway city including dancing, singing, street performances and many more things that will most definitely capture your eye! 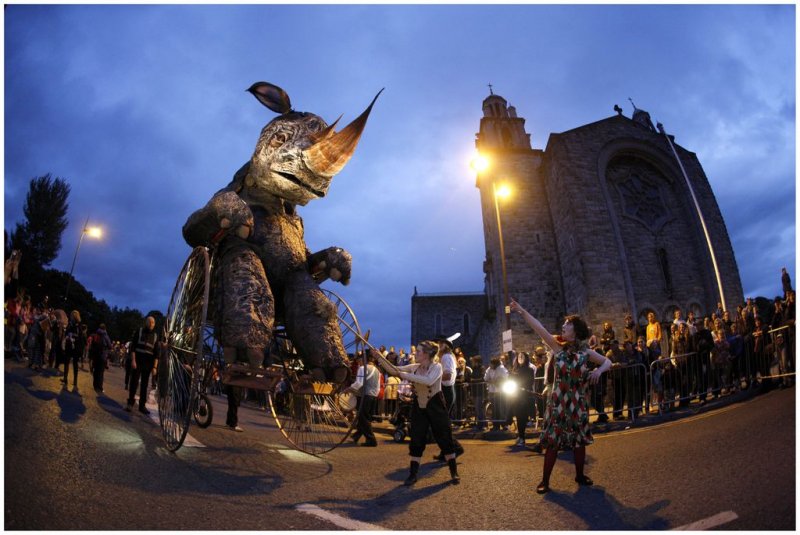 The Galway Races is a must see event!  It is held before and during the August Bank Holiday in Ireland for 1 week.  People come from far and wide to the races whether it's for racing or just to take in and enjoy the wonderful atmosphere in Galway city.

The Salthill Air Show is usually held every year around the month of June.  It is a spectacular day show which gathers people together from all around the World.

There are a wide variety of restaurants in the city ranging from fine dining to fast food takeaway.

Funworld is located over Supermacs in Eyre Square and has 2 bowlingalleys, 2 pool tables, pinball and coin operated games.

Go-karting is available just a short driving distance away in either Glenamaddy or Loughrea.

Leisureland is situated in Salthill which is only a 10 minute drive from the city.  It has plenty of things to do for the whole family including swimming facilities, outdoor playground and slides, the big wheel, crazy golf and so on.

There are 2 cinemas in Galway City:

After the Anglo-Norman invasion in the 13th century, the power of the city was divulged to 14 'Tribes', rich families of English descent, and that's why the city became known as the City of the Tribes.
The family's names were Athy, Blake, Bodkin, Browne, Darcy, Deane, Ffont, French, Joyce, Kirwan, Lynch, Martin, Morris, and Skerritt.  Members of these families served as Burgesses and as Mayors of Galway up to the capture of Galway by a Cromwellian army in 1652. 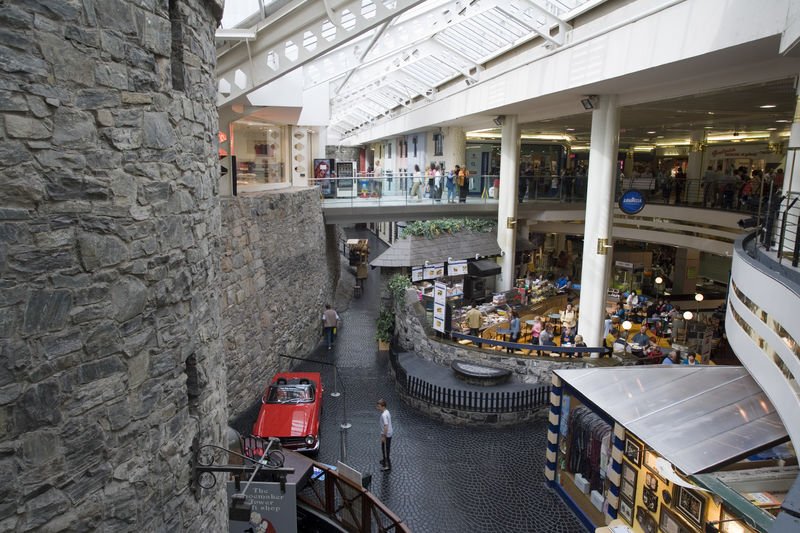 The City Treaty was presented in 1484 by King Richard III and, both prior to and since that time, Galway city has been a thriving centre of commerce and trade for the West of Ireland.  The busy dock area in Galway city used to see gigantic sailing ships bound for the United States of America and was the Spanish Armada's base during its western voyages.  Galway was famous at that time for its involvement in the wine trade - Spanish wines specifically, and the Spanish influence is retained in an area of the city called the Spanish Arch.  The arches were built in 1584 and were intended to protect the city's quays.

The well-known Claddagh ring stands as a monument to love and friendship.  The design is charming and apparent.  There are two hands joined together to support a single heart, and upon it a crown.  The significance of the ring is 'let love and friendship reign'.  The ring can be worn in three different ways and there is a differnet meaning to each way it is worn in the search for love: 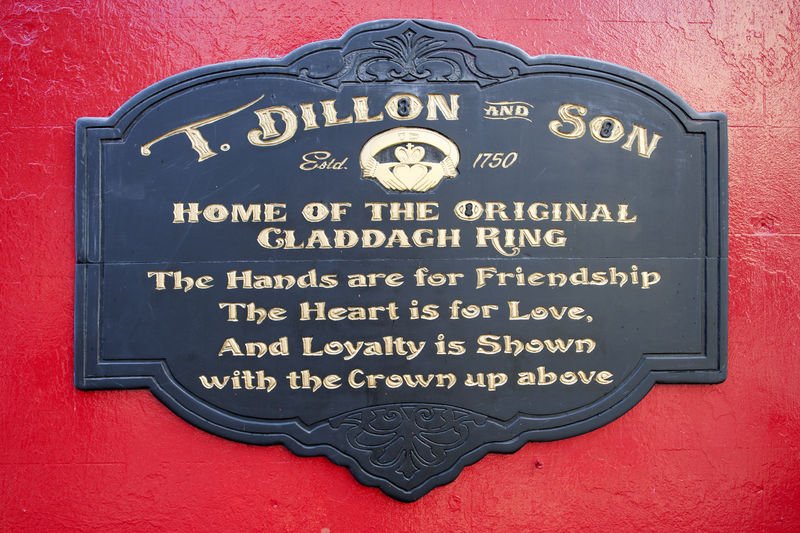 Galway City is a good base to explore Connemara and the Aran Islands.